An e-mail will be sent to your registered e-mail address. 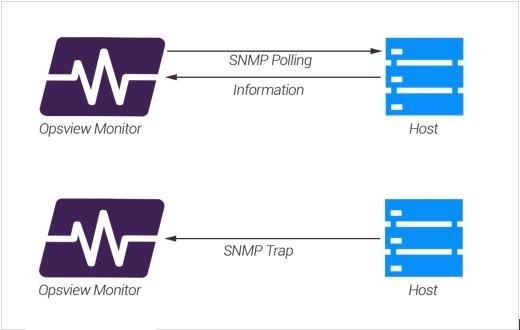 What is an SNMP Trap?

With SNMP Polling, the Network Management Station (NMS), Opsview, is required to poll various objects for information on various devices. This could take a large amount of time to configure and fine tune, and in very large environments, use a large amount of computing power.

The alternative is called an 'SNMP Trap'. With an SNMP Trap, instead of the router (for example) being polled for information on a regular basis by Opsview, the router itself will let Opsview know of any problems or issues via a 'trap'.

The above illustration shows how an Opsview server will regularly poll a host for information, whether there is a problem on that host or not. In the example below it, the Opsview is sitting 'listening' for SNMP Traps; when the Host encounters an issue then a trap will be sent to tell Opsview, which in turn will change a Service Check to the state of 'CRITICAL' or 'WARNING' based on the rules you define.

Devices can usually be configured to send specific types of trap such as link status changes, BGP, HSRP, and many others, making this a flexible monitoring option.

From the device perspective, the traps can usually be configured to send a trap to a maximum of two devices at a time. When received by Opsview it will be passed through a perl-based rules engine, allowing you to match specific traps from devices and generate appropriate alerts. In order to do this, SNMP Traps must be passed from the device into Opsview via an SNMP Trap Collector.

See MIBs for SNMP Traps and Gets to add your MIBs that are required for translating SNMP Traps. 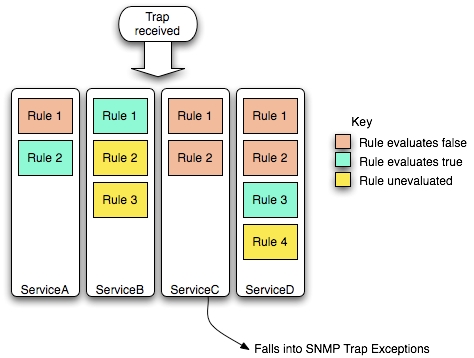 An action could be either:

If the incoming trap does not evaluate to true for any rules, then it becomes an exception and will appear on the SNMP Trap Exceptions page. This is required so that an administrator is aware that the rules need tuning to cater for this particular trap.

When a trap is received, it contains information about the source IP. This is associated to a Host. A Host can have more than one SNMP trap service check defined. In this case, each Service Check is evaluated independently of the others. The illustration below shows a trap being evaluated in four Service Checks, represented as columns.

These columns are not ordered, so there is no guarantee which Service Check column will be evaluated first. A consequence of multiple Service Checks is that a single trap could raise multiple alerts to Opsview. However, there will only ever be one SNMP Trap Exception per trap.

Note: Traps received will have the SNMP community value hidden so that passwords are not stored on the file system.

With SNMP monitoring, you are able to receive information in real time about what is going on with the devices in your network. This is particularly useful on large networks as it can be used in place of active SNMP (where a device is polled for status information).

Devices can usually be configured to send specific types of trap such as link status changes, BGP, HSRP and many others, making this a flexible monitoring option capable of running on 99.9% of network devices such as Cisco, Juniper, Dell, HP and more.

By using SNMP traps, you will be able to reduce your network and server load and provide faster service to your customers.

Blog
How to Configure SNMPv3 Traps

SNMPv3 traps can be quite complicated to configure the first time you go through the process, but when you understand what's going on, everything...

Blog
How to do an SNMP walk

This guide shows you how to run an SNMP walk in Opsview.

A guide on how to monitor Juniper EX switches using SNMP and Opsview.